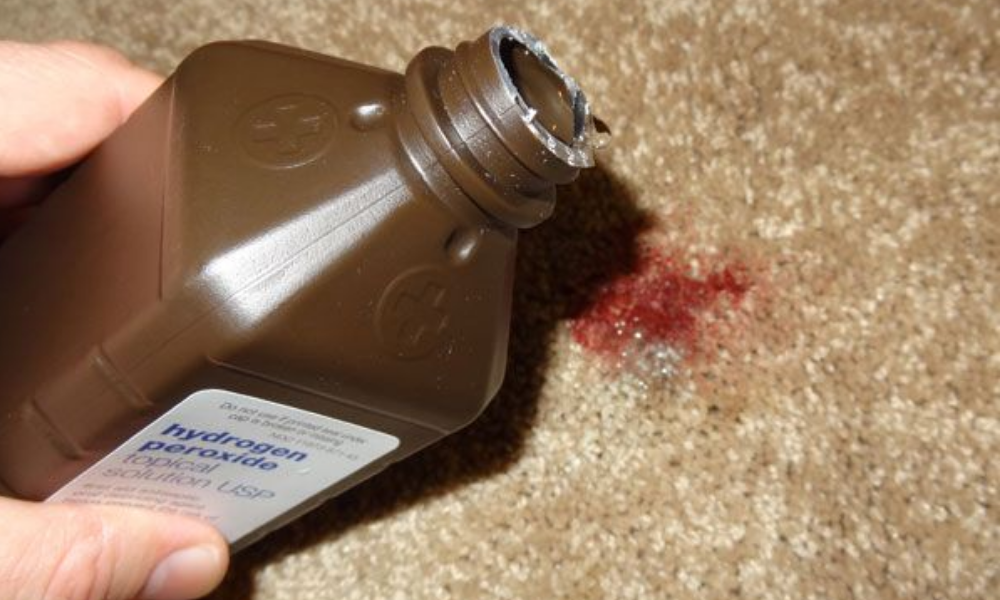 Firstly you need to apply cold water to the bloodstain. This is a quick, effective way to get rid of the stain. Ensure to dab the stain with a white cloth or kitchen paper towel before applying the hydrogen peroxide. Never rub or scrub the bloodstain. Instead, dab it with a rag or dry wipe. You can also use a spray bottle to apply the peroxide.

After applying the peroxide, you should blot the blood stain with a dry cloth to avoid further damage. While this may seem like a simple procedure, it will not work for everyone. If you’re unsure whether the stain dye will be safe on your carpet, you can first test it on a small area. To be safe, try a small patch of the carpet before applying the peroxide on the whole carpet.

What Is Hydrogen Peroxide & How Does It work?

For peroxide to have power, it needs one extra oxygen molecule, which oxidizes. “This is how peroxide obtains its power,” adds Dr. Beers. In addition to killing bacteria, this oxidation also bleaches the color out of porous materials such as fabrics.

When using peroxide, make sure it is medical-grade peroxide with a 3 percent strength concentration, indicating 97 percent water and 3 percent peroxide in the solution. As Dr. Beers explains, “Medical grade is strong enough for household use.”

Another option is to purchase a highly concentrated version of hydrogen peroxide, known as food-grade peroxide, with a concentration as high as 35 percent. It is called “food-grade” because it is used extensively in the food industry for various functions, including the processing and bleaching of certain foods.

How To Clean Blood Out Of Carpet With Hydrogen Peroxide?

Hydrogen peroxide is widely advertised on the internet as a fantastic stain remover. It’s vital to remember, though, that hydrogen peroxide is a bleaching agent, not a disinfectant. In addition, putting bleach or bleaching products anywhere near your carpet is the absolute last thing you want to do.

The safest course of action is to test the hydrogen peroxide solution on a hidden section of your carpet before applying it to the stain itself.

When you’re in a hurry, instead of reaching for trusted pantry cleaners such as vinegar and baking soda, reach for the medicine cupboard for assistance. Then follow these steps one by one:

What Is The Recommended Time To Leave Hydrogen Peroxide On Blood Stains?

To use hydrogen peroxide to get blood out of your linens, start by placing the blood-stained area of your sheet in a large bowl and mixing well. Afterward, pour a small amount of hydrogen peroxide over it (we recommend around a quarter-cup) and cover with cold water. Allow it to soak for approximately 24 hours. If the stain has not been completely removed, repeat the procedure.

You can also mix liquid detergent with cold water if you have an older stain. This is best for removing fresh stains because it absorbs the blood. But it can damage the carpet if misused. If the stain is fresh, make sure to apply cold water first, which will prevent the blood from coagulating and causing permanent damage to your carpet. And don’t forget to blot the stain with a dry cloth after applying the hydrogen peroxide.

Is It Possible To Bleach Carpet With Hydrogen Peroxide?

Your carpet’s color will be affected by the concentration of hydrogen peroxide used, as well as the type of dyes used in its dyeing. The considerations listed above make it easy to see how a simple attempt to clear a stain might go wrong, which is why it is strongly recommended that you investigate or test a tiny piece before applying the solution to a larger area. Our carpet cleaning suggestions may assist if you are looking for general cleaning. Using the services of a professional carpet cleaning company is recommended if you are unsure about how to clean your carpet. It is preferable to be safe than sorry.

How Does Hydrogen Peroxide React When It Is Sprayed On Carpet?

Is Peroxide That Is Bubbling A Sign Of Infection?

It is a frequent belief that if hydrogen peroxide bubbles, it signifies your wound is contaminated. While this is not always the case, it is a prevalent misconception. Whether your wound is infected or not, hydrogen peroxide will bubble. While cleaning, a chemical reaction occurs, resulting in tiny oxygen bubbles. Don’t get too worked up about the bubbles.

How To Store Hydrogen Peroxide In A Safe & Appropriate Manner?

Hydrogen peroxide is classified as a chemical. If this substance is used, it can have catastrophic consequences. Please keep it in a closed cabinet where children and pets will not access it.

Check the expiration date on the peroxide before using it. As Dr. Beers explains, “the additional oxygen degrades over time.” “Once the bubbles have been expelled, you’re left with nothing but water.” If possible, keep the peroxide in its original brown bottle or a dark spray bottle to prevent it from being exposed to light. If it is no longer foaming, pour it down the sink and replace it with a fresh bottle.

Another way to clean blood from a carpet is to apply hydrogen peroxide. This will help remove the red stain from the fibers. After this, you can use cold water to wipe the blood off. If the peroxide is not practical, you can use a dry cloth. Then, the bloodstain can be easily removed. However, the hydrogen-peroxide must be applied in small amounts to avoid leaving any toxic residue on the carpet.

The Pro Cleaners Network is a professional cleaning company that provides top-quality cleaning services to businesses and homes all over the country. We have a team of experienced and qualified cleaners who are dedicated to providing exceptional service.